And the Winner of the Slang Word Scavenger Hunt is.....

And the winner of the slang word scavenger hunt is....


1. smuggled or illicitly distilled liquor
2. inferior liquor
3. the best moonshine also known as catdaddy. also a girl's boyfriend, especially if rich
4. Crazy was used to tell a person to leave, you're screwy
5. a bore
6. a bar tha tsells illigal liquor
7. a guy on probationary status, or a new guy
8. a foolish, scatterbrained, or stupid woman
9. nonsense
10. a dumpy old car and old heap
11. one who fights or acts with force a firey girl also lesser name for a panda


Eunice has won a free signed copy of Moonshine Murder! Thank you to all the participants. Visit my website for your own signed copy.

During the 1920's, many people used coded words to represent illegal activities. Out of this new slang words were created.

Last week I did a slang word scavenger hunt with a classroom using my novel, Moonshine Murder. The students had a list of words they had to define based on the context of the sentence. We had so much fun with the activity, that I decided to share it here.

So here's the rules: Define the words listed below using the comment section of the blog. If you get them all correct, then your name will go in the drawing for a free autographed copy of Moonshine Murder. Be sure to share this link with any young adults you may know. This is a lot of fun and great education as well! The contest will stay open a full week, winner to be announced the following Wednesday, May 29th, during my usual post.

Good luck and have fun!


Like the activity? View my website for the teacher / parent guide for Moonshine Murder. Tons of great activities for young adults!
Posted by http://esjamesonbooks.blogspot.com/ at 1:00 AM 2 comments: 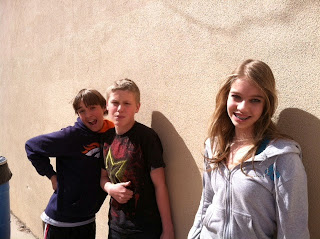 
Today, I'm sharing an exciting new post. In March I was fortunate enough to visit our local Middle School classroom in Mancos, Colorado. Ms. Farrar's publications class participated in a "share story" where students in groups of three wrote a portion of a flash fiction story. One wrote the beginning, another picked up the middle, and the third student scribed the resolution.

The winning story was promised to be published here and the authors each received a free copy of my novel, Moonshine Murder. 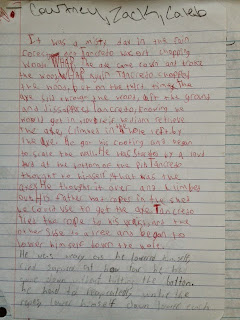 It was a misty day in the rain forest, and Tancredo was out chopping wood.
WHAP. The axe came down and splintered the log.
WHAP, again Tancredo chopped the wood, but on the third time, the axe slid through his cold fingers, hit the ground and disappeared.

Tancredo, knowing he would get in trouble if he didn’t retrieve the axe, climbed through the whole left by the axe. He got his footing and began to scale the wall. He was startled by a loud thud at the bottom of the pit. Tancredo thought to himself, that was the axe. How was he to climb that far?

He thought it over then climbed out. His father had ropes in the shed he could use to repel to the bottom. Tancredo tied the rope to his waist, and the other side to a tree, and began to lower himself down the pit.

Tancredo was weary as he lowered himself and surprised at how far he had gone down without touching the bottom. He had to repeatedly untie the ropes, lowering himself down more each time. When he finally did reach the bottom he could just barely touch the bottom with his feet.

Tancredo started to feel around the dark, deep hole. He tripped over something hard, but before he could pick it up, he heard a soft crunch. Tancredo knew that sound, but couldn’t remember from where. He felt what he stepped on and recognized the paper soft crackle in his hands. It was a snake skin, shed off the body, and it was big.

Tancredo heard the snake slither and covered his mouth. He couldn’t move, stuck by fear and the memory of a snake biting his brother. He tried to climb up the slope but couldn’t find a good place to grip.

At last he knew what to do. He had to face his fears. It was the only way. He grabbed the axe and chopped off the snake’s head.
As he climbed up the slope all the way to the surface, he knew that he no longer feared the snake.


Posted by http://esjamesonbooks.blogspot.com/ at 1:00 AM 8 comments: